1957-63: Ion Andreescu Academy of Fine Arts, Kolozsvár. Tutor : József Bene.
1964: National Junior Prize for his work ‘ Avas Weeding Feast’ , Bukarest. He lived in Nagybánya between 1963-1990. Governor of folk art in Máramaros. His research work is remarkable in the field of pottery art, textile art and wood-carving. He did metal-work, tapestry, interior decorations. He made stele on the graves of Simon Hollósy in Máramarossziget and of Mr and Mrs Krizsán in Nagybánya. In 1990 he settled down in Mezőkövesd, Hungary. He is living in Eger at present.

He participated every significant exhibitions, overseas biennials and galleries, in Germany, Czechoslovakia, Israel, Canada and elsewhere. He had his own private exhibition in every significant city in Transylvania such as Nagybánya, Szatmárnémeti, Kolozsvár, Brassó, Nagyvárad, Csíkszereda and of course Bukarest. His paintings can be found in private collections in Romania and in Hungary.

“An artist never seems to receive in his lifetime the deserved precious value for his artwork, moreover he is underpaid. The forthcoming years, decades will prove and justify the value and standard of his life-work in the field of art.”

István Kozma does not deny us a clue to his works. Not that his work is abstract or ‘stodgy’ and difficult to understand, but because he wants the spectator to understand the way he juxtaposes universal art with the modern.

The idea is the very same as mastering art. The way Istvan Kozma becoming a mature and inspired artist is recorded since 1963. It was in 1963 when he left the Ion Andreescu Academy of Fine Arts in Kolozsvár. Then he moved to Nagybánya where he worked for 27 years. It was fairly unusual from an artist to spend so many years in one place. It was even more strange that besides mastering his art and studying the current style and main stream, he was very keen to study the rich folk art of the environs and then trying to make an influence on its spirituality.

István Kozma was talented in this way. Besides participating every significant exhibition between 1964-1990, his own private shows travelled to faraway countries like Germany, England and Canada where his paintings, metal works and tapestry were on display. Meantime he was concerned with the living folk art of the Avas in Szatmár and the Alps of Máramaros studying the works of tapestry weavers, blanket weavers, potters and glaziers. He was particularly intrigued by the process of dyeing specially by the use of soil and cobalt thus making use of his observations in his art. Folk art and Kozma inspired each other. Kozma got inspired by the vivid colours of folk art, and in return Kozma enriched folk art by conjuring the ancient and long forgotten motives, patterns, desings and the old weaver and knotting methods.

In 1990 István Kozma settled down in Mezőkövesd, another area that is famous for its folk art. His latest works show the influence of this symbiosis.

” … ambition is not the way to art, only blood is the right and true way. The road to becoming an artist is not an easy one, it needs a man and patience. Hardship does not break the true artist. The more bitterness he has to deal with in life, the more valuable his art gets, since what is invisible for the eye, can only perceived by the soul.”

“… His art school in Nagybánya was swept away by history. Although the town people still call the studios surrounded by the park as the ‘art estate’, Nagybánya as the reforming traditional heart of both Hungarian and universal fine arts has ceased to exist but lives on in the hearts of its one-time students, in their works far and wide in the Carpathian – Basin. István Kozma is one of them, belonging to the third artistic generation. His style shows the influence of great artists, still he managed to find his own voice. The collocation of the vivid colours and the powerful features of his is very impressive and it seems to well preserve the 66-year-old artist who still seems to be open to innovation. He humbly refers to himself as a ‘ desciple from Nagybánya’. As it is the feature of great artists he is also a mysterious character emitting the mysteriousness and unique aspect of the world towards us all.”

“Once upon a time a little old train arrived at Nagybánya’s little station the size of a house with a garden. Out of the train got some bohemian artists wearing grand bowler hats and scarves. Thus it happened that these artists, seeing Virághegy, Klastromrét, Kereszthegy, the mint, the calvinist and catholic church towers, the miners’ houses and the colours of the sky, established the 20th century modern Hungarian art. They also founded a school that has been working on and off since then. Generations mastered these motifs in this school (including , I say, today’s art education) to ward off avant-garde and other current trends in art as gladiators. It is not only the motives, the styles and masters and art historians of Nagybánya that exist today, but Nagybánya (like Szentendre and Kalotaszeg) as a ‘spiritual landscape’ that is vitalized not by reality or tradition but by vocation – the very same function it once held. Artist István Kozma, a native of Nagybánya but now a resident of Mezőkövesd, regards himself as a supportive inheritor of that ‘spiritual landscape, since he saw, with his very own eyes, his picturesque town fading away and be replaced by the concrete camp of a foreign culture. These changes in Nagybánya however made it evident how urgent and of what great significance the artist’s commitment is to guard and energize the Hungarian creative spirit in its new and vulnerable situation. The art of the whole 20th century came to deny first the previous century and finally its very self. ( Meantime producing values everlasting) . The art of Kozma is fairly unusual in the way he turns away from the art of denying but respecting all that has been accumulated and preserved over a hundred years by the Hungarian and European art and considering it as a natural raw material to assimilate it into his very own art. It may sound wierd, but one has to lean pretty close to his paintings and discover the message from inch to inch and absorb the spirit of Fauve, Cezanne, the Hollósy generation, Braque, Picasso, Zefferen, Mondrianon, and time –travel through the secession to the European art school, to Vasarelly and on the waves of the avant-garde and all is done not analyzing artistic relics but indulging in the motifs and the specific indivuality of the artist. This wonderful transformation is one of his characteritics, the other one is that this fresh reality created by the 20th century painters is having a Hungarian eye looking down at us , his having particularly a Nagybánya eye. Thus paintings , similarly to folk art, seem to have accumulated both national and universal aspects of an ethnical group, just like Bartók’s music, who realizing this, laid down the road of both Hungarian and European music. It might not be the only or the most ideal way to convey the messages of the 20th century painters for the generation of the coming millennium but I am convinced that István Kozma found ‘modus vivendi’ in the long forgotten genre of panel painting that reinforces my hopes : our century has just as many genuine self-portraits to posterity as the previous ones had.”

Kozma uses vivid colours, his paintings radiates a unique and dynamic color range. His works are very much articulated. He follows the perspective scenography of the renaissance, he juxtaposes time and space. His art is attractive and persuasive. Kozma is a naturalistic artist who although follows tradition, has his own voice and whose art shows vivid volours and conveys his unique visions piercingly. 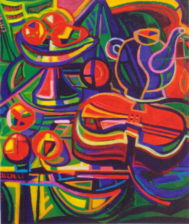 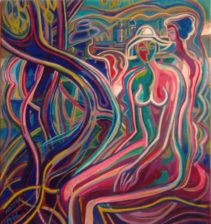 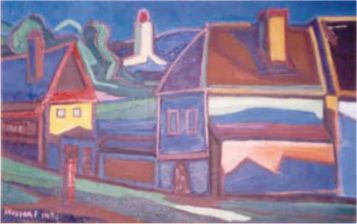 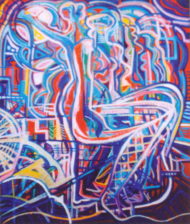 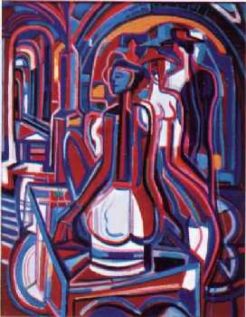 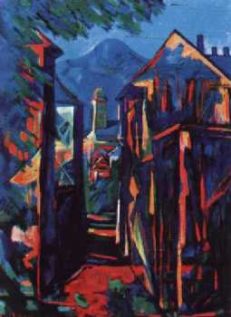 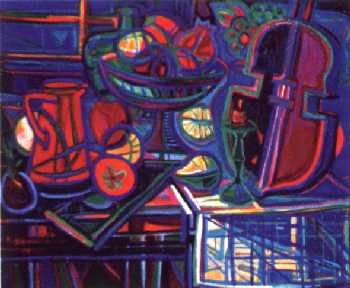 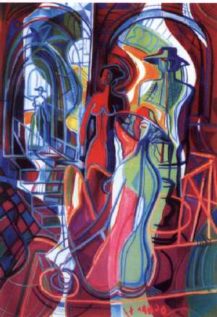 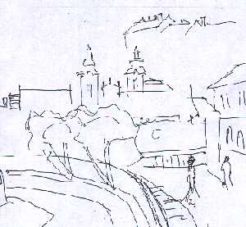 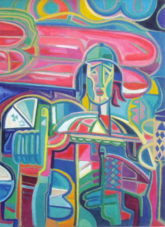 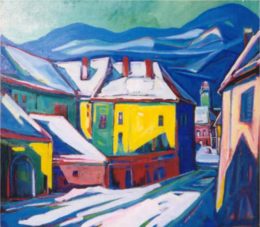 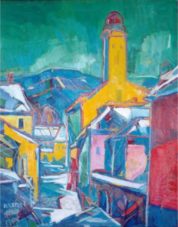 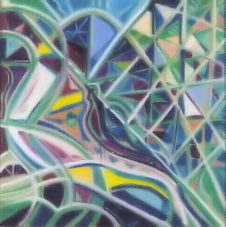 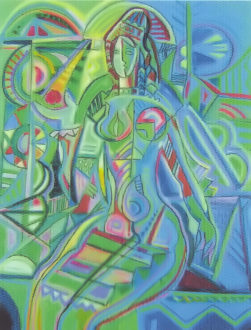 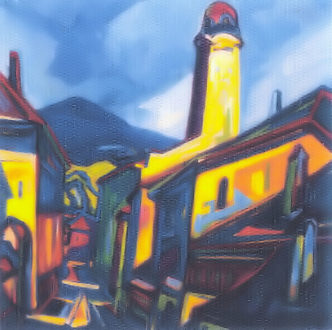 Calvinist church and school in Nagybánya with the Kereszthegy, 1979. NB 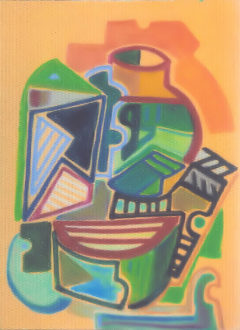 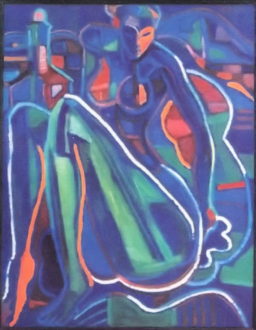 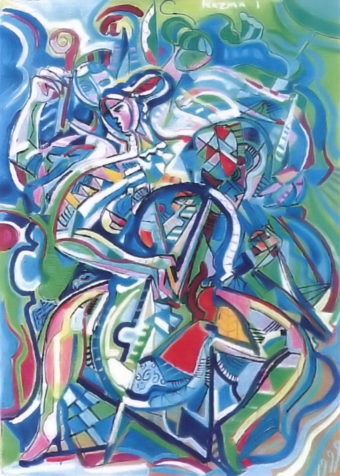 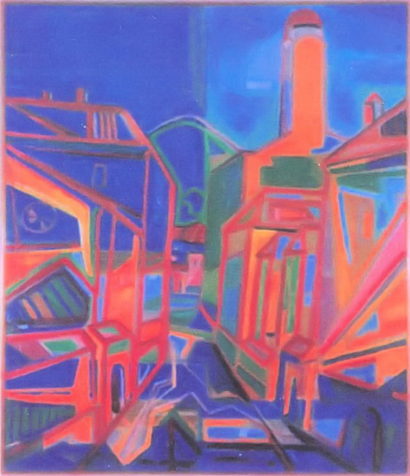 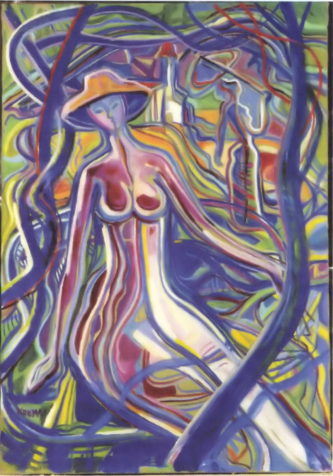 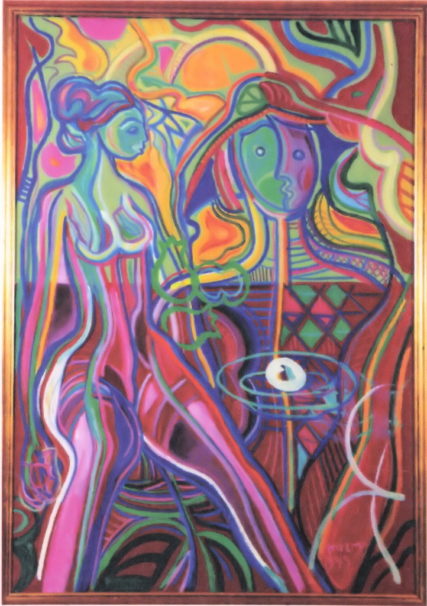 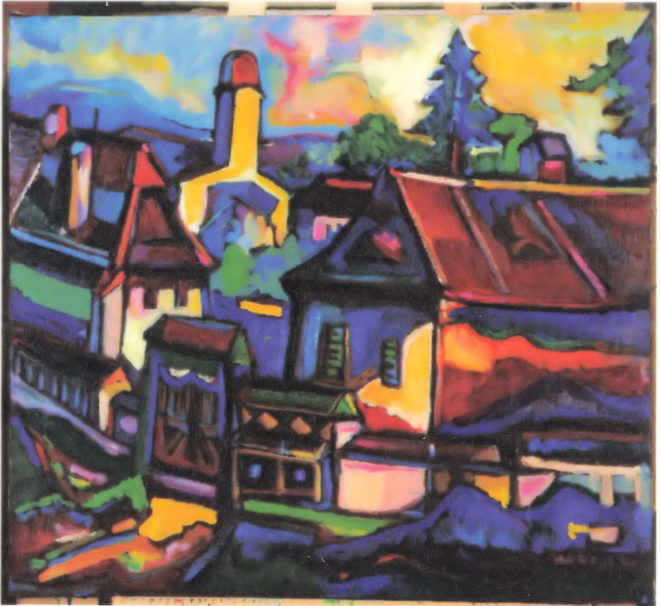 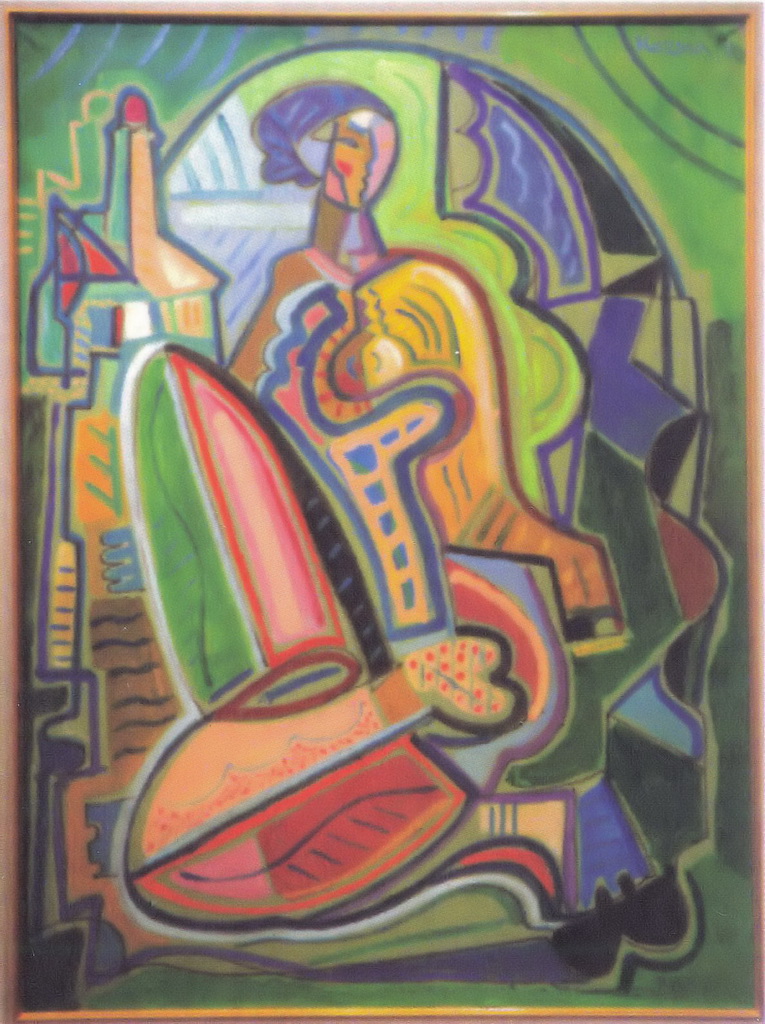