István Takács was born in Mezőkövesd, in a traditional peasant family. After leaving grammar school he applied to the School of Art and Crafts in Budapest. His major was painting. He studies for 5 years and to improve he had to struggle with bitter hardship, finally mastering the trade, he had chosen.

His social background explains the genuity of his art : the unique vived colours and the scale of tints he used. He inherited a dizzying imagination that is the characteristic of his larger works and also his analyzing skill that features his smaller paintings especially his Matyó Madonna. His religious works feature a deep spiritual look and are free from the sophisticated taste of the baroque. His colours radiate like precious stones, they even make sounds, his magnificent stlye makes the composition balanced and coherent , his dynamic drawing stlye and his infinite imagination are all dominant in making him the painter of the baroque. There are hardly any other painter who would apprecatie the spirituality of the baroque as István Takács does.

He felt inspired to become a church painter, a vocation that promised not much glory. A church painter is a vocation of a missionary who is writing the ‘ Bible of the Poor’ with his own paintbrush, preaching with colours and spreading the gospel – something to live for.

His especally brilliant ceiling paintings are richly decorated with large body of people, and features the perspective of earth and heavens. Above the crowd of both biblical and mundane people there is the open gates of heaven with its saints of the church and our country.

He was one of the the most accomplished follower of the baroque artists. His imaginative paintings decorate our churches, his art making the church goers to look on to the open sky itself and see the heavens through his vived images. His beautiful Matyó Madonnas would deserve another chapter, that feature his brilliant skill in folk art.

He also got comissions by the Cathedrals of Vác and Szombathely. If one would feel like viewing all his paintigs, they would need to visit more than 200 churches travelling through the country, but it definitely worth it. Visit Satoraljaújhely in the North, Bajaszentiván in the South, Besenyszög in the East, Bozsok in the West – just to mention a few. His hometown is a must to visit to view his works in two churches and around the town that uncovers his skillful art.

He did not migrate. He did not convey his art abroad. This is something to treasure and be proud of today, when Europeanity is confronted with national ideas.

He believed : ” The aim is not to bring art into Hungary, but to create art here, and most of all to create Hungarian Art.” Thus he mainly painted Hungarian saints and Hungarian people. When in 1956 he was encouraged to leave the country, and get rich abroad, he said : ” until I have some dry breadcrumbs in my beloved country, in Hungary, I will not migrate for a piece of fine milk-loaf.”

He had his heart in the art of painting to creat something everlasting that reflects his love for his country, his devotion for religion, and his spirituality. He did not get brainwashed by various ideologies, get stereotyped nor get lost in morbid dreams on the road of corruption. His spiritual and emotional strength, his honesty ( that was free from all philosophical brainstorming) , his deep piety, his talented skills are the characteritics that earned him to be one of the best church artists.

Creating murals kept István Takács alive. Even when losing vitality he worked day in day out, shivering in cold churches. Although he is considered to be the greatest baroque painter of the country, he was always a modest person, too modest mayhaps. Since never flattered to clerical nor to worldly authorities, he hardly had any support from them. He never gave up his individuality. He never parted with his art and ideas. He never criticized anyone. He believed in the power of time : fashions go by , values stay.

About success he said: ” Success might seem interesting from the outside. For me it means absolutely nothing. It is not success that inspires me but ambition. I need to feel that my work is needed, is understood and my murals inspire people the way sermons do. Words fly away but murals remain. People tend to forget about the words they hear at a service, but I would like to move them and fill their hearts with piety and hope.”

Murals, church paintings are just one, though quite dominant, field of his artwork. Besides church art he was successful in other fields of painting. His love for the land of the matyós is presented on those paingings of his that recorded the life of the matyó people, the way he first got exposed to it and the way he interpreted the life of the peasantry to the public.

He hardly has any painting that would not feature the traditional matyó feeling, such as the stunning integration of colours on his biblical or worldy themed paintings, on the picture of the Madonna holding her child, on images picturing groups of matyó people or the life of the working peasants. He excelled in preserving the matyó traditions and picturing the life of theirs and their neighbourhood, thus the flamboyant life of the matyós is preserved and saved in the art of István Takács, that is only a tourist attraction today.

As if the sun of God would radiate on these paintings. The vivid colours are so lively and bright , that they seem to advertise the hope in eternal life.

He believed that : ” the chastity of art is the bread on which body is nourished, and that liberates the soul.”

Exhibition commemorating the 100th anniversary of the birth of József Dala and István Takács. 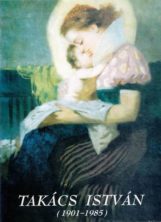 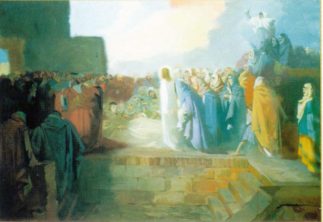 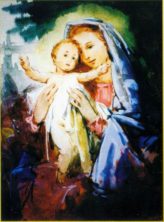 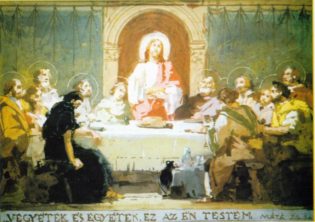 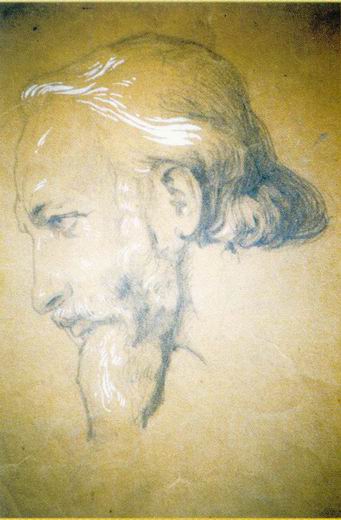 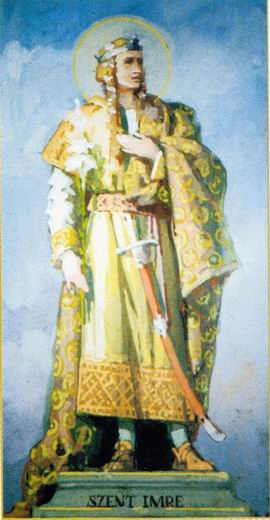 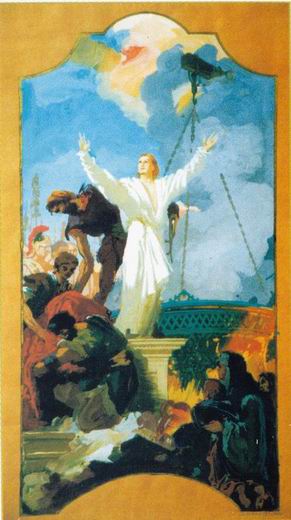 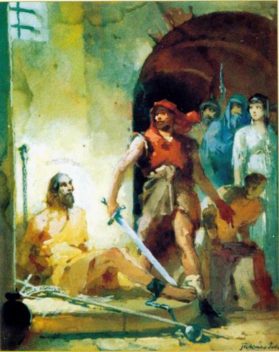 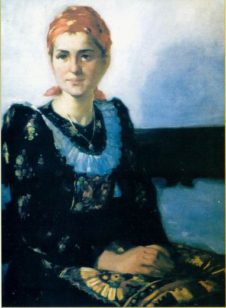 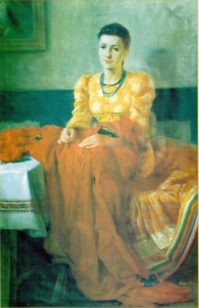 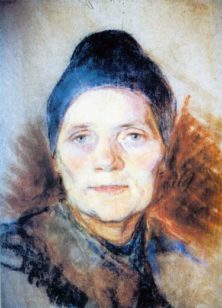 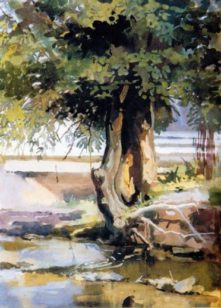 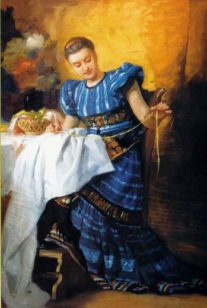 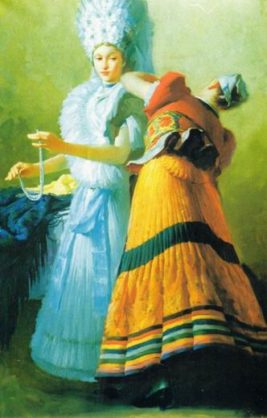 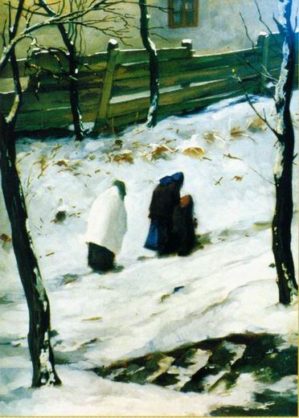 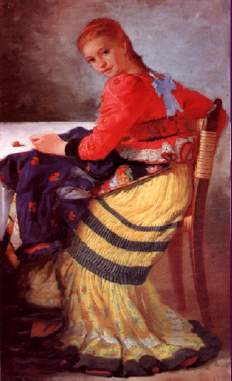 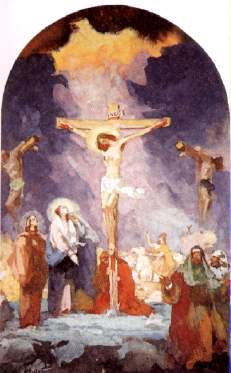 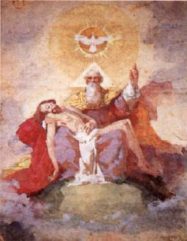 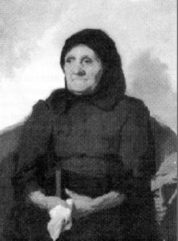 Portait of his Mother (oil painting) 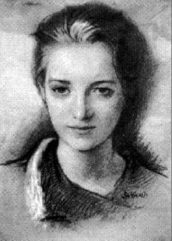 Drawing of his Wife 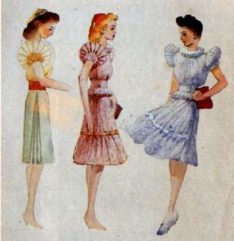 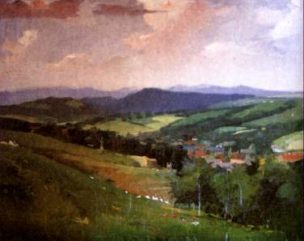