József Dala was born in Sárvár. He got a degree at the School of Art. From 1927 he lived and worked in Mezőkövesd. He taught art in the local grammar school and worked as a painter and etnographic writer.

Being an inspired and dedicated teacher, the young man soon observes the huge contrast in the living standard between his hometown and his workplace. He sees the town socially underdeveloped and the distress and poverty of Mezőkövesd compared to the reasonably fair living standard of his hometown on the other side of the country.

Being sensitive to human fate, he has a sense of duty not only to teach and create art but to go out of the school building and help to find and then cure the problems. He knew he would have to map up the town’s capibility properly and get to know its people heartily. He was aware of getting to know the people does not only mean to read books about them but to mingle with the crowd.

This way he was exposed to many experiences such as the people’s colorful folklore, their famous embroidery and also their actual problems in life. Since then he considered it his mission to help to find solutions to these problems besides recording their cultural heritage and familiarizing the true value of their folk art.

His articles got published in local, national and special papers, and his lectures were aired on the radio. In his lectures and writings the social thwartings of matyó life were mentioned repeatedly. In 1941 with the support of some agricultural and medical specialists he composed his masterwork titled ‘Matyóland – the famous Mezőkövesd’. It was him who created the term ‘ Matyóland’ thus spreading the town’s fame both nationwide and world-wide. The book gives a thorough picture of the life of the matyó people in the 30s.

After finishing the monography he did not cease writing. Ha was busy painting with one hand and writing with the other. He was there when the Matyó periodical ( today an annual ) was born and he remained member of the editor board.

Map of the town in the clan

He was studying the structure of the settlement of Mezőkövesd and designed the proper map of the town based on the old buildings in the clan (hadas) section. His map beautifully records both the town’s sociographical characteristics and its geographical sections.

The highlight of his public career is establishing the Matyó Museum in the 1950s. Being so keen to open the museum he did not want to waste time waiting all the artifacts to accumulate. He was searching through attics for antique furniture and ‘begging from door to door’ in the parish hall and the county hall , until the little museum was finally opened in 1954 which was the forerunner of today’s Matyó Museum.

Originally his life mission was painting. Wherever the tide of life would guide him , whether it be volunteering or social work, he was always faithful to the art of painting.

He always believed art being one of the fundamental part of human culture. His painting would give the true account of reality, the way of people’s life, life itself , the living conditions of the matyó people ( a special ethnical island of the country) , all the intimate events of common people, their social grief, the dominant moments in the life of the peasants. One of his painting picturing the agricultural life of the peasants won first prize at the National Competition of Art in Agriculture organized by the Ministry of Agriculture.

His painting titled the ‘Parish Feast in Kápolna’ depicts the devotional life of people. He pictures the busy and noisy fair – the very characteristic of the hey-day of the market town, Mezőkövesd. Dala was not only interested in the poverty distressed agricultural seasonal labourers but also in the factory workers, miners and station workers.

His paintbrush gave colour to his beloved streets of Mezőkövesd and to the common people wearing folk costume and living their everyday life.

His airy and prospective landscapes has raised the ancient hun countrysides, the Danube Bend, the picturesque Lake Balaton to the fame of art. The peculiar air of the dewy hills of Zebegény and Keszthely and their colourful houses are vividly vibrating on his canvas.

His friend, István Takács ( Mezőkövesd born, nationwide famous , known overseas, brilliant artist) said of him : ” Very few artist is talented in the way as Dala is”.

After getting retired – due to having driven away from Mezőkövesd by ungifted envious enemies of his –his art started to flourish in his solitude and in various workshops both in standard and sufficiency. At the very end of his life, literally in the last moment of his life, after several exhibitions held in Budapest and the countryside, he came back to his beloved Mezőkövesd, the arena of his life-work to attend the greatest exhibition of his life-time that would finally bring him the well and long deserved fame with the Pro Urbe Prize. The exhibition truly featured his deep love and devotion for art : in the way he depicts the unity of human and nature, the human once one with nature but never ceceding from it, or the beauty of the matyó people’s life in the colurful harmony of his genre paintings.

His life-work stands still in the modern world in which tradition is condemned. József Dala remained true to his rational self portraying the realistic aspect of life.

Although he mastered no abstract ambitions, his art remained up-to-date, due to his style since his imagination was strongly attached to the landscape of Mezőkövesd and its matyó people. His artistic style showed appreciation toward the people, and the rich colours he used has raised their wonderful world to the fame of art.

The main characteristic of his art is truthfulness and loyalty to himself and his talent. As János Arany had it : ” I am what my people are, cause longing for being someone else leads to death”.

Exhibition commemorating the 100th anniversary of the birth of József Dala and István Takács. Collection catalogued. 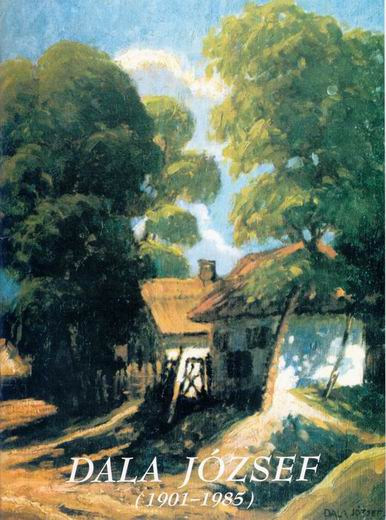 In the shade of locust-tree (cover page) 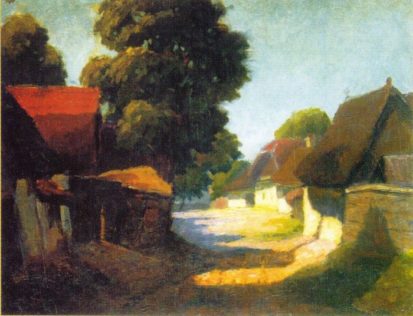 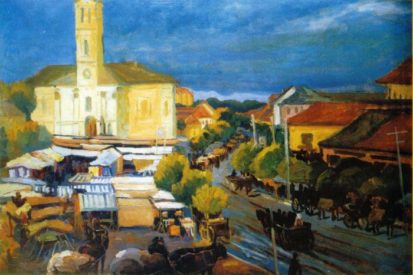 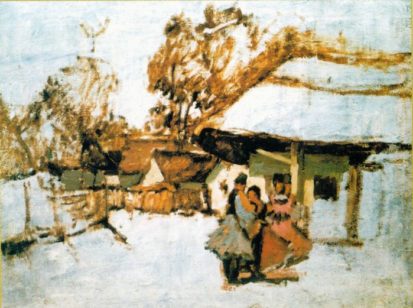 Dancing couples in the street of Mezőkövesd /80×60 cm, oil on canvas/ 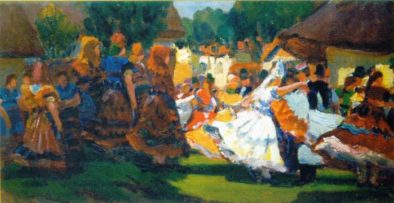 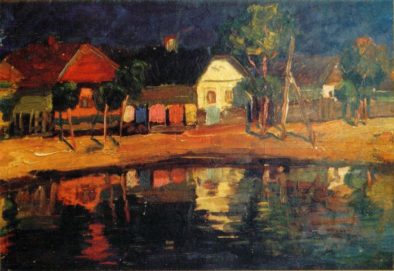 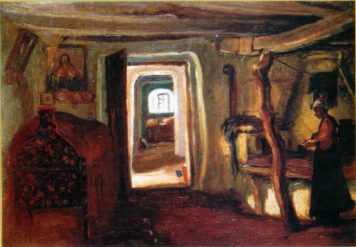 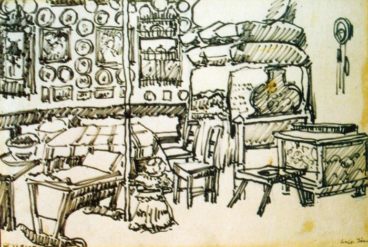 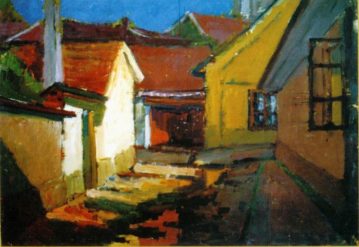 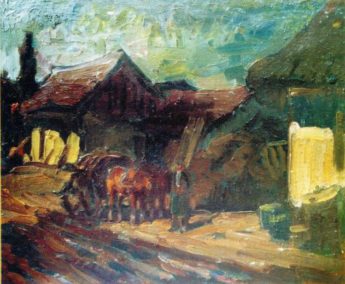 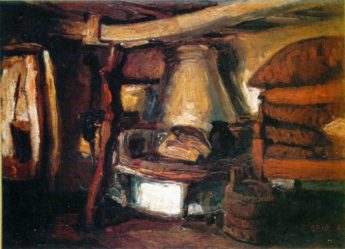 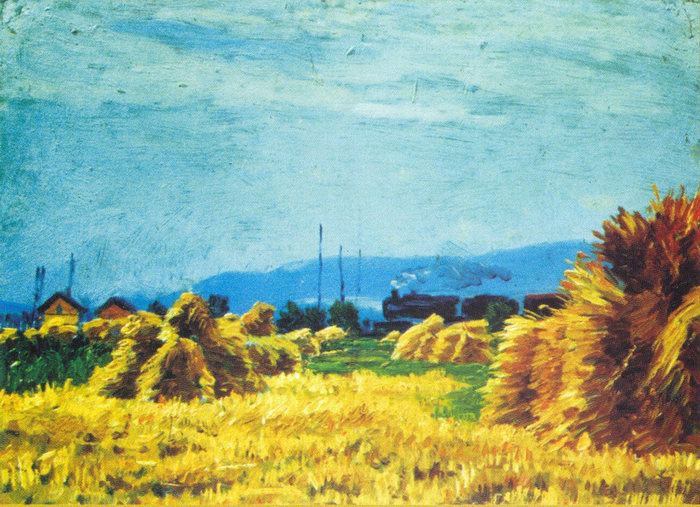 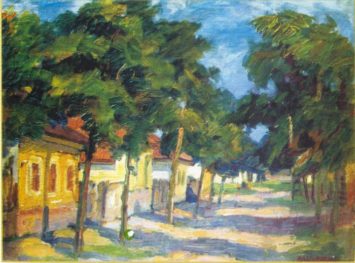 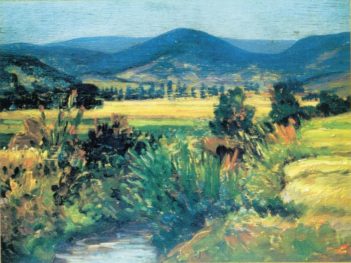 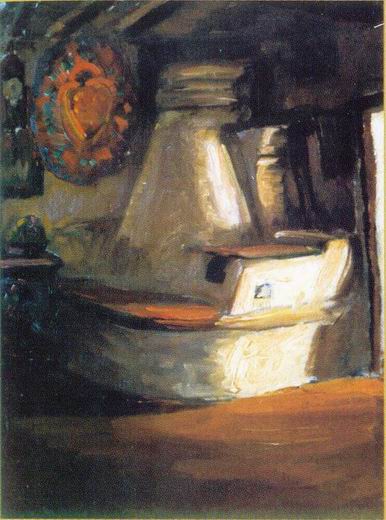 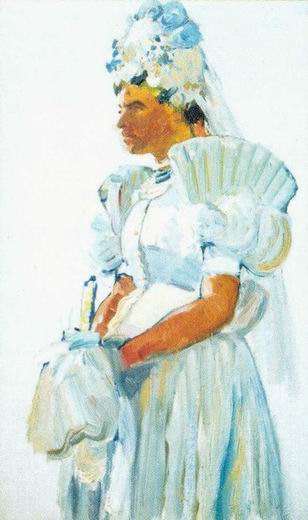 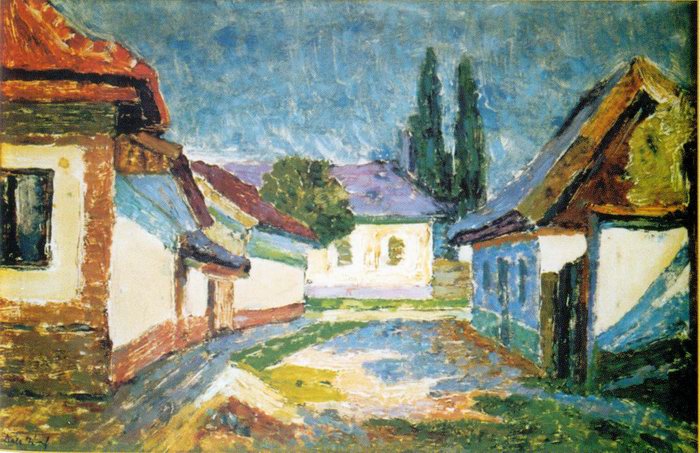 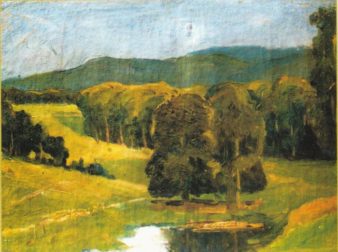 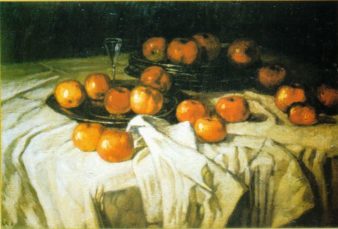 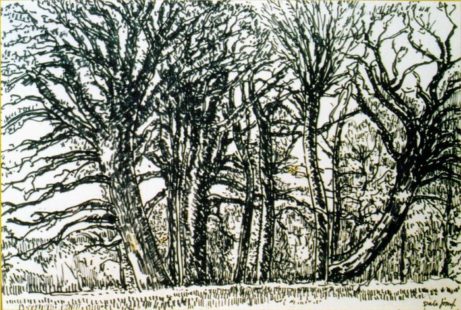 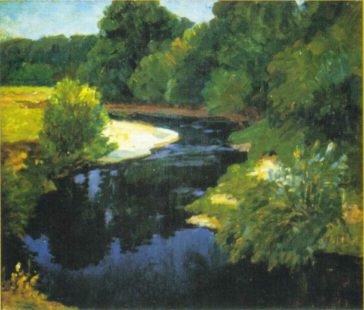 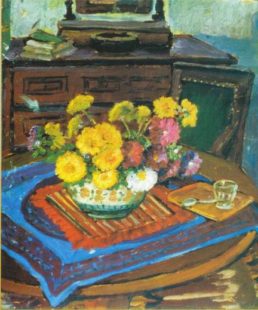